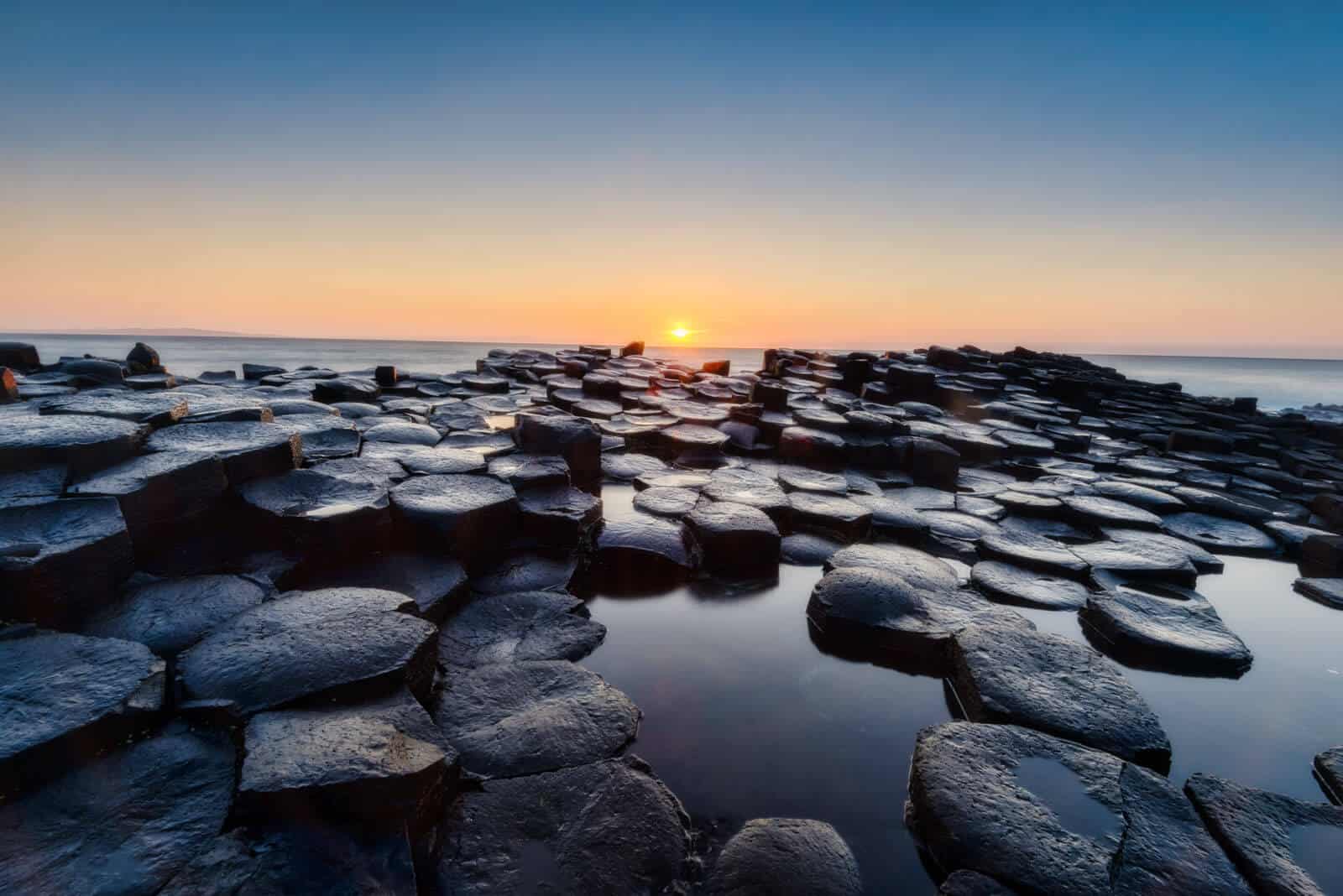 Giants Causeway a Surreal experience in a special place.

How the above photograph turned into this by a sequence of events. But the real end result further down in the blog is a moment of pure magic for me. 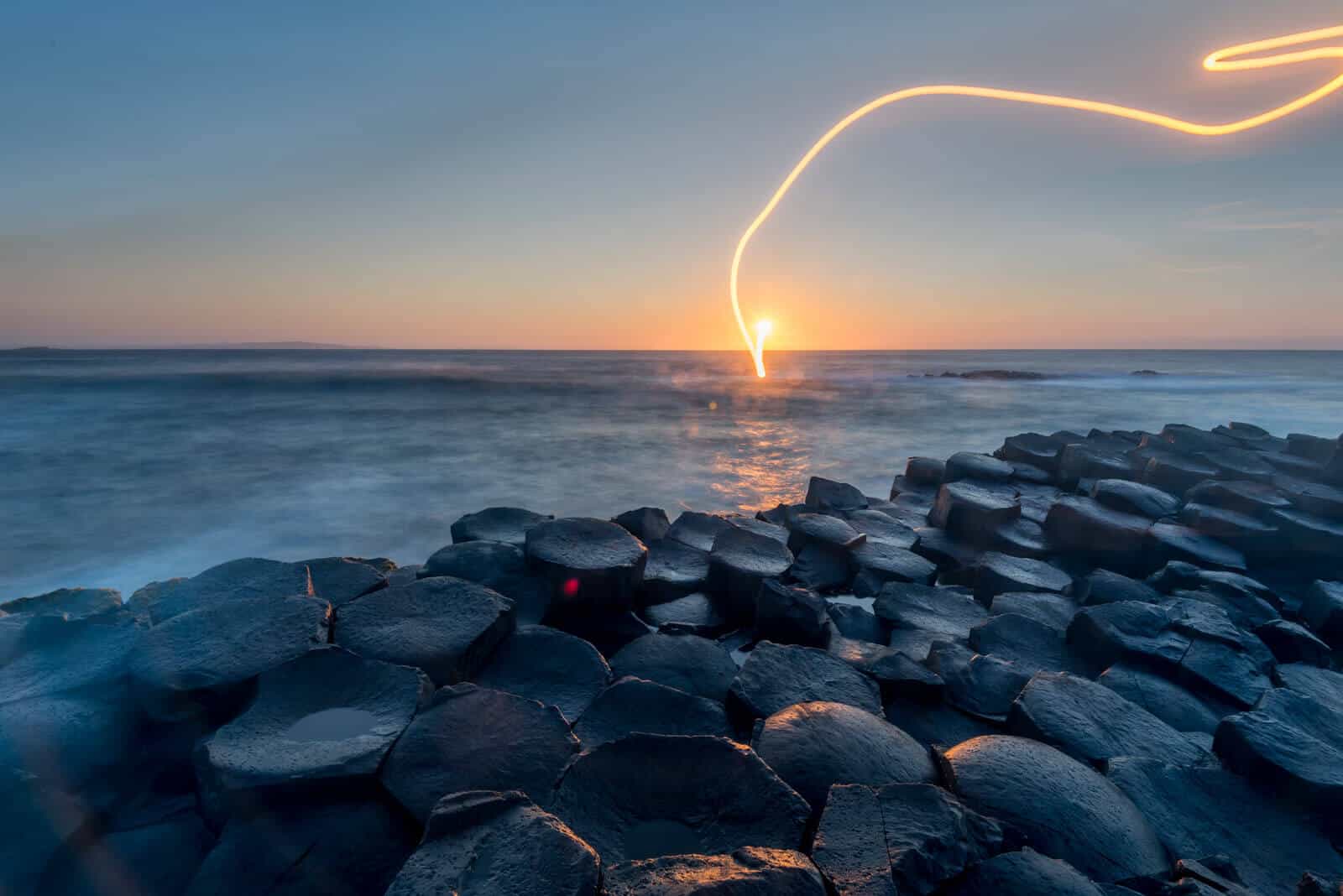 Let me just start by saying the Giants Causeway is one utterly spectacular place. For me personally, I was completely overwhelmed, saying that the 7-hour drive up to it probably didn’t help either.

Picture yourselves delving into this secret little world as you slowly wander down this small winding road and you slowly get exposed to the views and the mild sea spray all the while the cliffs continue to rise and tower above you.

The soft Irish evening light with its nice yellow tones caressing the cliff face, while the hint of a slight mist just hangs in the air as if not able to physically tear itself away from the views. Every breath inhales the fresh aroma of salt and seaweed carried by that teasing little whip of wind rushing past your face every and then gently caressing your skin.

This is what you delve into as the 8th wonder of the world gradually reveals itself bit by bit. The sheer scale of what you see is immense and completely unbelievable, at any moment you expect to see a unicorn galloping down the road in front of you with a leprechaun on its back screaming out a few colourful words.

The crazy thing is just when you think that’s it, there is always more around the corner. This is a land where rocks no longer conform to the normal. Huge cliffs surrounded you on both sides and then when you looked out to sea and the sun slowly sinking towards the horizon.

I was just lost for words…

Now I thought to myself where the bloody hell do you start here? There are amazing sites all around and wonderful panoramic views in every direction. With iconic rock formations, surely this was going to be easy, or was it?

I think it just completely caught me by surprise. This whole experience was just a bit much and even though I had seen many a photograph from there it was so much better in real life. To focus in a single direction just seemed so wrong. This place is more than a single view it’s a complete surrounding, not a view. I can only imagine being there on a rough winters evening with the waves thrashing against the rocks and the sound echoing all around with the vibrations being not only felt but endured.

I was very lucky to have an American photographer and Instagram friend (now real-world friends) Billy Rubin and his wife Jay there with me. I am really glad they were there as I actually may not have taken out my camera otherwise. It felt like some sort of sensory overload going on in my mind. How and yes I really do mean dear god how is it going to be possible to capture its sheer beauty. Is it even possible and if so how could you choose what angle to showcase it from and how could you leave out certain aspects of the view then? I could only think this really is a place to bring my drone…

Getting back to the photographs I noticed two immediate problems.

Firstly no clouds, which means a flat boring sky. No real cure for that sadly other than dropping the camera angle possibly to reveal as little of the sky as possible. After all, look at the abundance of foreground everywhere.

Secondly, tourists walking into shot constantly, the solution to this modern-day problem was pushing several of them into the sea, after I pushed the first few in they all seemed to stay clear of me then :-). In all seriousness, the only solution was to stay close to the edge of the rocks which meant standing on very slippery area’s. This greatly reduced the odds of a walk-in, although it did still happened.

So back to the shot. The first shot is just your average let’s try to capture the rocks and sunset as balanced as possible. So using a Firecrest 5 stop nd grad and 6 stop nd filter was going to be necessary to reduce the light level enough for a long exposure shot.

After a quick test shot, we were away, then it was just a matter of timing.

So speaking of timing that’s how we get to the second shot, yes it looks odd but the reality of the situation was I was attempting a longer exposure and working out my setting and this was my first trial shot. I looked up to watch the ocean and noticed this rather large wave rolling in.. I kept my eye on it and as it got closer it just continued to grow. I decided to run hence the sun trail in the image as I grabbed the camera and retreated to safety, all the while descending down these octagonal boobytraps.

I moved back as quickly as I could and turned around when I heard the loud crash. There I saw three girls standing at the edge of the rocks and immediately behind them I saw this wall of water shoot to the sky. They were standing immediately to my left when I was taking the shots earlier and never moved.

Obviously busy taking selfies they were oblivious to the huge wave that hit the rocks and shot up into the air in what can only be described as a huge jet or stream of water possibly after by being funnelled by the shape of the rocks below. I am trying to describe how to phrase this as best as I can but to say it landed on them is about the best description I can put it. Literally poured from the sky, knocked one of them over and the other two were completely drenched. Think of a bathtub of water and multiply that by 40 or 50 that’s how much water those poor girls got.

In all my life on the coast, I have never ever seen anyone get as wet as that. To say they may as well have jumped into the water and went for a swim would be incredibly accurate.

I immediately moved in front of them as the ground was sloping towards me, just in case one of them got swept downwards and into the sea. They thankfully got up and quickly ran to safety. I popped my tripod down weighed up the maths from the previous setting to quickly work out a 5-second exposure and this was the resulting image. 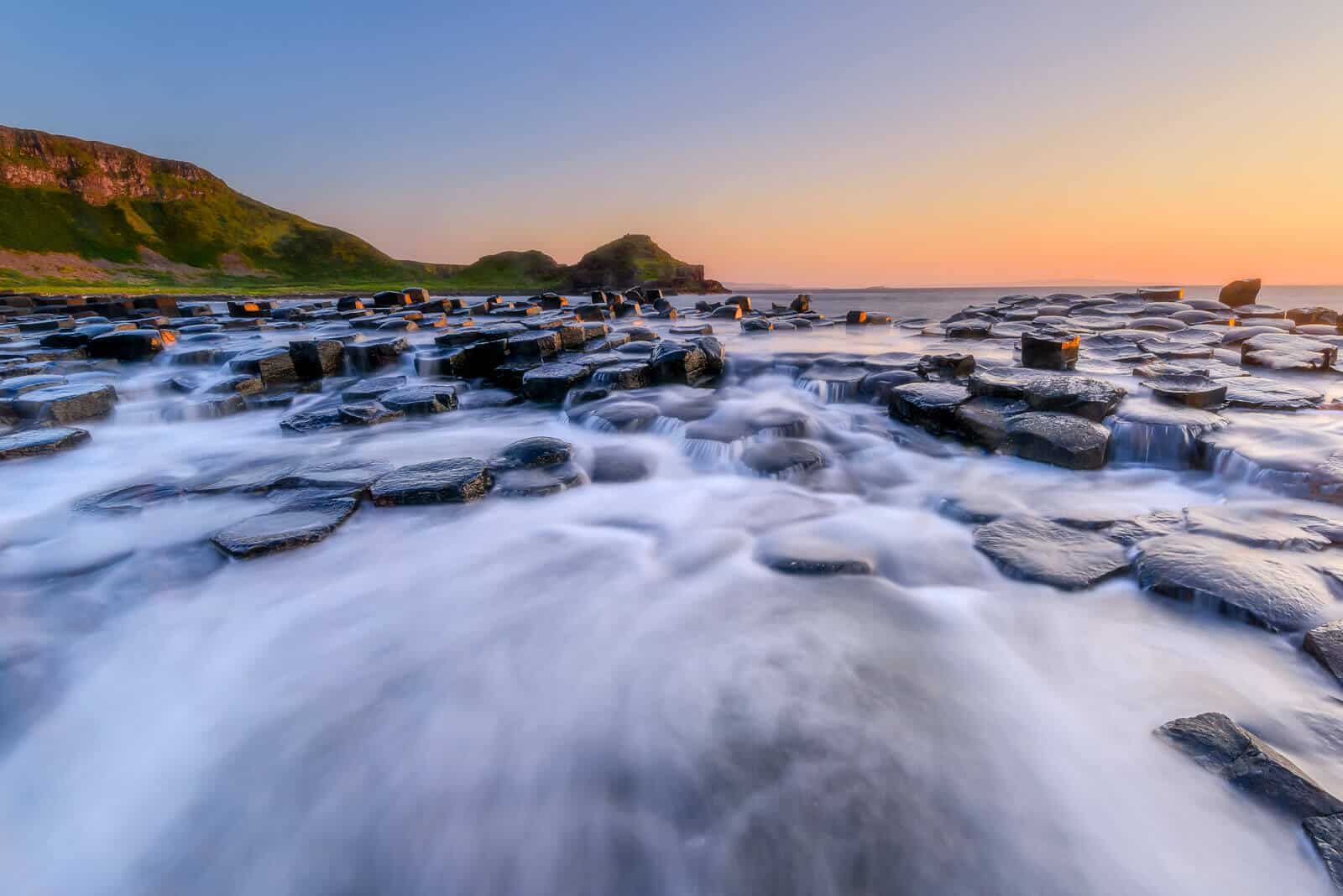 When you consider I took this shot about 20 seconds after the wave hit them and this was the water still running down the rocks I think that gives you a very good idea of the volume of water that fell from the sky. Incidentally, this was the only wave to do that for the 2 hours I was there. It’s the one reason I always say never ever turn your back on the sea. You never know when it will surprise you.

Just had a thought there now as I write this, I wonder how those selfies worked out? Probably some amazing shots if their phones ever worked again after the soaking.

I said I would share the story behind the shot as there is nearly always a story to a photograph and this one is about being in the wrong place at the wrong time while someone else is in the right place at the right time :-).

This brings me to my motto “It’s better to be lucky than good” in this case and as in several other of my photographs, that’s very accurate.

Stay safe and if you can stay dry 🙂

Alternatively, if you can’t stay dry make sure someone at least captures the moment.

I have a blog post up about Camera Filters and another one on Long Exposure Photography if you’re interested in learning more about camera filters and their uses.

I have also a blog post on How to Capture the images which details the process involved and the results.

See you out there,

Galley Head Lighthouse one of West Corks most beautiful destinations.